Sri Lanka returns to Spanish market after a decade

Sri Lanka made a significant impact at the 37th International Tourism Trade Fair (FITUR) in Madrid, Spain from 18-22 January.

This event, organised by IFEMA, brought together 9,672 tourism companies, institutions and bodies from 165 countries and regions, making it the third-largest tourism fair in Europe. Sri Lanka participated in this fair after a lapse of nearly 10 years.

The Sri Lanka Tourism pavilion received much attention with inquiries flowing in from many trade visitors and the public alike.

Participation in FITUR augurs well for the much-needed exposure for Sri Lanka as an attractive tourism destination for Spanish-speaking countries, contributing in a substantive manner to its overall growth strategy.

Ten leading private sector companies along with Sri Lanka Tourism collectively marketed Sri Lanka based on the common theme of vibrancy, authenticity and compactness as a destination. 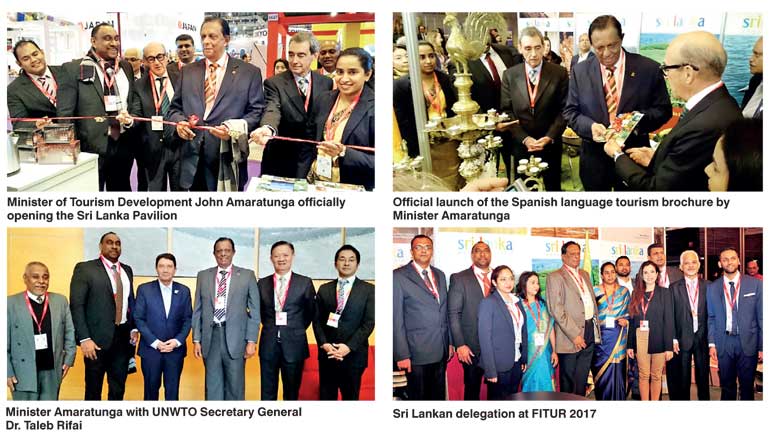 The first Sri Lanka Tourism brochure in Spanish was launched by Minister Amaratunga at the Sri Lanka stand in order to strengthen the destination marketing efforts among Spanish travellers.

The Minister was presented a copy of the renowned Spanish travel magazine ‘Excelencias’ which carried a six-page supplement on Sri Lanka, by its Editor Veronica Santiago during the opening ceremony.

Speaking at the event Minister Amaratunga emphasised that participation in FITUR 2017 was a vital decision taken by Sri Lanka Tourism ably assisted by Sri Lanka’s Embassy in Paris.

He remarked that it would no doubt help to reposition Sri Lanka in Spain as a strategic hub for the Latin American region and emphasised that it was a strategic decision to make a comeback at the travel fair after almost a decade.

He also spoke of the conducive environment prevailing in Sri Lanka for the Spanish market.

Meanwhile, the United Nations World Tourism Organization (UNWTO) launched the ‘International Year of Sustainable Tourism’ in the presence of over 65 Ministers of Tourism on the sidelines of the FITUR.

During discussions with the President and Committee Members of CEAV, this proposal was given positive consideration and agreement was reached in principle to send a fact-finding mission to Sri Lanka in May 2017.

Sri Lanka was also invited to attend the Meeting of Heads of the World Travel Agents to be convened in Valencia later this year.

The invitation was extended during a meeting Minister Amaratunga and the Commercial Counsellor of Sri Lanka’s Embassy in Paris held with Dr. Taleb Rifai, Secretary General of the UNWTO and Director Regional Programme for Asia Pacific and his team on the sidelines of the travel fair.

The Minister conveyed his gratitude to the UNWTO Secretary General for visiting Sri Lanka in 2016 for the ‘UNWTO Conference on Tourism: a Catalyst for Development, Peace and Reconciliation’, which was held in Passikudah.

Minister Amaratunga invited Dr. Rifai to attend the PATA Conference scheduled to be held in Sri Lanka later this year.

Based on a proposal made by the Minister, agreement was reached to link the Sri Lanka Tourism Promotion Campaign with the UNWTO Year of Sustainable Tourism.

The UNWTO Chief also agreed to facilitate the formulation of the Sri Lanka Tourism Development Master Plan and assist in sustainable tourism development in the Northern and Eastern provinces of the country.

On a recommendation made by the Sri Lankan side, the UNWTO Secretary General agreed to conduct training programs for the Commercial Attaches of Sri Lanka Embassies in order to effectively promote the country as a tourism destination.

Minister Amaratunga also met the Chairperson of UNWTO ST-EP Foundation, Dho Young-Shim which is the pioneering foundation in UNWTO for alleviating poverty in order to discuss obtaining assistance for tourism development in the context of poverty alleviation. This foundation will soon be transformed as ST-EP International, elevating its stature and Chairperson Dho Young-Shim invited Sri Lanka to be a signatory to this agreement which would also facilitate the country’s objective of alleviating poverty through tourism.

This event will take place in March or September during the UNWTO General Assembly.

Meanwhile, the Ceylon Tea counter at the Sri Lanka Pavilion attracted a large number of visitors and there were many inquiries for promoting the Ceylon Tea brand and the Ceylon Cinnamon brand in Spain.