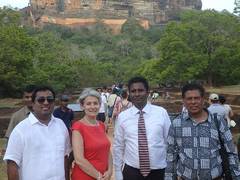 The Director-General was accompanied throughout this visit by the Ambassador and Permanent Delegate to UNESCO Mr Tilak Ranaviraja.